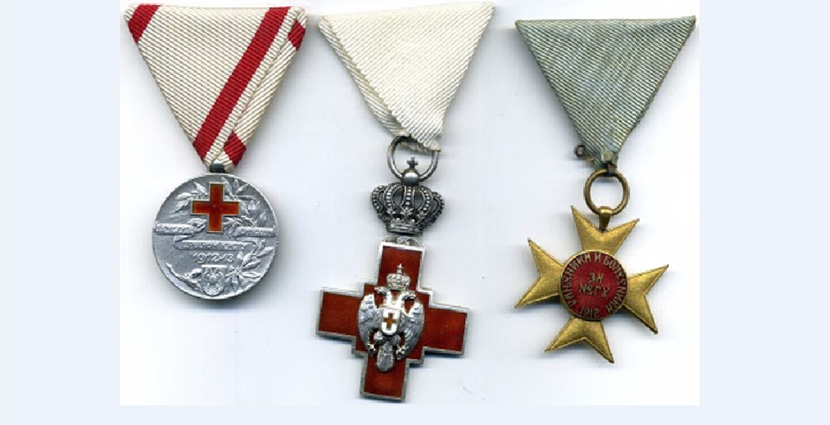 An exhibition of Serbian medals through history and the decorations awarded to a little known group of Australian women medical volunteers and to a number of Australian Army soldiers in World War One, will be held on Sunday 8th May at the St Lazarus Serbian Orthodox Church, 14 Renwick St, Alexandria, NSW, as part of the National Trust Heritage Festival 2016.

The exhibition will feature a range of Serbian medals, explanatory talks and the presentation of a brochure about the medals and the Australian women medical volunteers and soldiers decorated by Serbia in World War One.

After regaining its independence in the nineteenth century, Serbia issued a remarkable set of medals that incorporate elements of Serbian history and that were manufactured by the leading medal workshops in Europe at the time. The designs were innovative and the technical standard is of the highest order. The medals symbolise the struggle for freedom by the Serbian people.

A collection of Serbian Orders, Medals for Bravery and Campaign and Service medals, will be exhibited by collectors with an explanatory talk.

A little know group of Australian women doctors, nursing sisters, orderlies and drivers volunteered to serve in Serbia and in support of the Serbian Army elsewhere during World War One. Because these volunteers were not in the Australian or British Armies, which, at the time declined the offer to serve from women doctors, their services are relatively unacknowledged in Australia, but were appreciated by a grateful Serbian Government, which decorated a number of them.

Australian Soldiers Decorated by Serbia in World War One

As a fellow ally, Serbia recognised the contribution and service of Australian soldiers and nurses at Gallipoli, Palestine and the Western Front. Examples of the decorations that Serbia awarded to these brave Australians, will be on display. There will also be presented a brochure documenting the Australians honoured by Serbia in the Great War and the medals that they received.