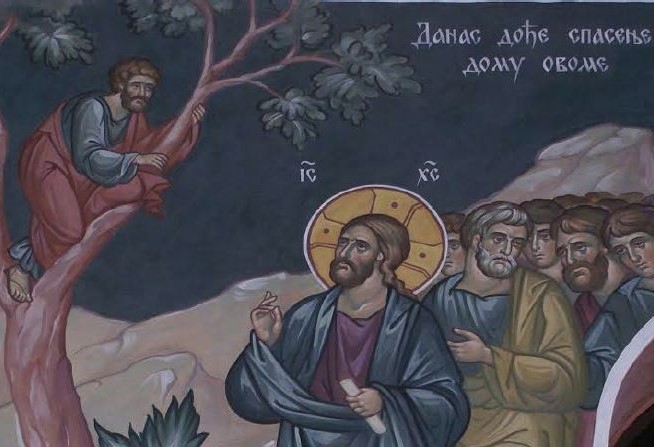 Then Jesus entered and passes through Jericho. Now behold, there was a man named Zacchaeus who was a chief tax collector, and he was rich. And he sought to see who Jesus was, but could not because of the crowd, for he was of short stature. So he run ahead and climbed up into a sycamore tree to se Him, for He was going to pass that way. And when Jesus came to the place, He looked up and saw him, and said to him, Zacchaeus, make haste and come down, for today I must stay at your house.” So he made haste and came down, and received Him joyfully. But when they saw it, they all complained, saying, “He has gone to be a guest with a man who is a sinner.” Then Zacchaeus stood and said to the Lord, “ Look, Lord, I give half of my goods to the poor; and if I have taken anything from anyone by false accusation, I restore fourfold.” And Jesus said to him, “Today salvation has come to this house, because he also is a son of Abraham; for the Son of Man has come to seek and to save that which was lost.”

In restoring eyesight to the blind man called Bartimaeus, Our Lord does another miracle in Jericho. This time He is opening spiritual eyes to a tax collector named Zacchaeus, thus enabling him to accept the Gospel, to perceive his inner self and his sins, to repent, and to drastically change his life. Opening spiritual eyes to a spiritually blind man, is just as great miracle as restoring eyesight to a man blind from birth. Zacchaeus was a chief tax collector, and in that capacity an employee of the Roman government. By the contract with Romans, he was obliged to give a certain agreed amount to them, and whatever is left over that amount he could keep for himself. He could freely overcharge people. The Gospel clearly says that Zacchaeus was a rich man, which means that he was guilty of gross extortion of people. As a result of such unfair practice, all tax collectors were despised, hated and viewed as the worst of sinners.

Jesus was passing by and as a small man, he was unable to see the road because of the crowd that had come to see him. Zacchaeus found a tree and climbed up into it to see Jesus. Seeing Zacchaeus up in that tree, Jesus as All-knowing God, recognized his repentant soul, called him by his name, and commanded him to make haste and come down, because He wanted to be a guest in his house. The fact that Jesus calls Zacchaeus by his name proves that God knows everybody’s name (John 10:3). Zacchaeus wants to see Jesus, but Our Lord goes one step further, and decides to enter into his house. This proves that God is more merciful than people, who are very quick in their self-praising and self-righteousness and who judge and point their finger at other people. The multitude of people, who were witnessing this event, human beings unable to read people’s hearts or to get into depths of human’s souls, still judged by external appearance. They complained about Jesus’s decision to enter into the home of a tax collector.

Even today, the Church is experiencing the same problem. The Church is usually seen as a club of righteous and sinless people, but in fact the Church is a workshop of salvation, a hospital for those who are sick and in need of help. “For I did not come to call the righteous, but sinners, to repentance (Matthew 9:13).” Repentance is just a beginning of a spiritual life. After repentance, a man starts to celebrate God, and to grow unto immeasurable spiritual heights. We are invited to be perfect, just as our Father in heaven is perfect (Matthew 5:48). That’s why the Church contains people who are on different levels of spirituality.

The dialog that follows testifies about the miraculous curing of the tax collector’s soul. Answering to Christ, and calling Him “Lord”, shows that for Zacchaeus Jesus is not only “Jesus from Nazareth”, but also the Son of God, Messiah. Then, Zacchaeus gives a half of his fortune to the poor, even though no one asked that from him. This proves that he’s not only familiar with the teachings of Christ, but also he lives according to the Gospel. By helping those in need he shows himself as a true follower of Christ. By offering to restore fourfold anyone from whom he has taken anything under false pretenses, he renounces his old life of sin. Even though no one has accused him of cheating and extortion, nevertheless he makes a public confession, and atones for his sins. The only way to wash away our sins is through repentance, not with money. Zacchaeus is not buying his salvation with his fortune. The Bible clearly says that a man cannot give anything in exchange for his soul (Matthew 8:37). His repentance “bears fruits worthy of repentance (Matthew 3:8)”, and that’s all God is asking from us. Giving half of his goods to the poor, Zacchaeus merely displays the kind of change his soul experienced after accepting Christ. Having experienced the love of Christ, he conquers selfish-self, and begins to worry about other people also.

Many people can find themselves in this Gospel story. They have all the earthly pleasures they wish, but still, their souls are empty and their lives are constantly lacking something. Zacchaeus was just like that, until he met Christ. “For what will it profit a man if he gains the whole world, and loses his own soul? (Matthew 8:36).” Greed is one of the main sins, and a man who meets the Lord can be liberated from that sin. That’s an endless addiction, which slowly pulls man into the abyss. God’s word is teaching us that “he who loves silver will not be satisfied with silver (Ecclesiastes 5:10).” Zacchaeus’s climbing into the tree, since he was a short man, symbolizes a man who’s trying to elevate himself above his own human nature, in order to conquer selfishness. That’s why he is saved by Jesus and called “a son of Abraham”, not only by words and descent, but also by the spirit and the truth he lives by. At the end of this Gospel, once again, our Lord confirms the purpose of His mission: “to seek and to save that which was lost.” In other words, He came to seek every man, even those who are lost, rejected, despised and hated by other people. Men just like Zacchaeus. By the early church records, Zacchaeus became a bishop in the Church.