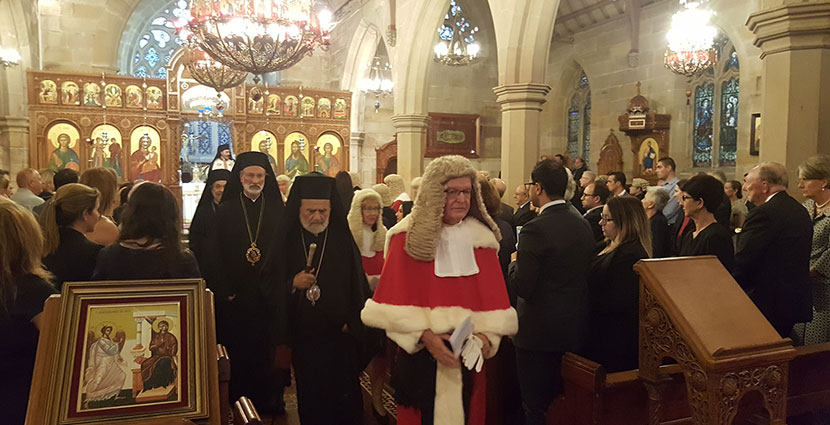 The Greek Orthodox Archdiocese of Australia, under the aegis of the Assembly of Canonical Orthodox Bishops of Oceania, hosted the 33rd Annual Opening of the Law Term for 2016 with a Pan-Orthodox Prayer Service held at the Annunciation Greek Orthodox Cathedral in Sydney on Tuesday evening, 16 February 2016. Many notable participants, including clergy and lay, legal professionals from the Inter-Orthodox community, were present to pray with and for dignitaries from the judiciary, including distinguished Supreme Court judicial officers, headed by the Chief Justice of the Supreme Court of New South Wales, The Honourable Tom Bathurst QC, as well as Mr John Eades, President of the New South Wales Bar Association.

His Eminence Archbishop Stylianos, Primate of the Greek Orthodox Archdiocese of Australia, Chairman of the Episcopal Assembly of Oceania, presided over the Service of Prayer and delivered a powerful, soul-searching and deeply thought-provoking homily on the Gospel parable of the Good Samaritan (Luke 10:25-37).

In prayerfully desiring every strength from above to all the Legal and Judicial Services of our State and Commonwealth, on behalf of all Orthodox jurisdictions in Australia, Archbishop Stylianos concluded with the observation: "With the above thoughts, our soul is filled with gratitude and admiration for all that the Law has offered until today within developed societies."

Also present at the Prayer Service were His Grace Bishop Irinej of the Metropolitanate of Australia and New Zealand of the Serbian Orthodox Church and His Grace Bishop Seraphim of Apollonias from the Greek Orthodox Archdiocese. Representing the Inter-Orthodox Consular Corps was His Excellency Dr Stavros Kyrmis, Consul General of the Hellenic Republic. The programme was led by barrister Mr Gregory Antipas.