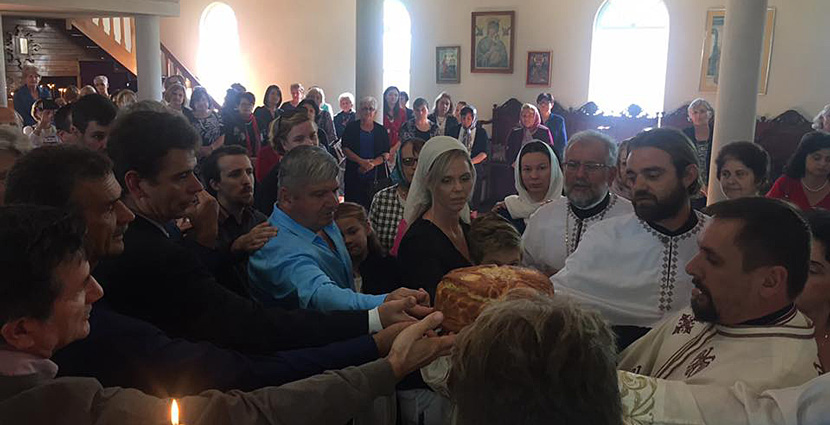 The Divine Liturgy was celebrated by the parish priest proto-presbyter Velibor Bojic, father Stanisa Ostojic, and father Nikola Stefanov. Festal procession around the church followed the Divine Liturgy. It was beautiful to see a large number of faithful people, especially children, holding icons in their hands as we went around the church. Upon entering back into the church, the fathers cut the Slava bread with the faithful.

In his sermon, father Stanisa spoke of the Holy Fathers of the First Ecumenical Council and of the Holy Father Nicholas, miracle worker of Myra, who was one of the most prominent participants in the Great Council. Father called on the people to follow the example of St Nicholas in preservation and loyalty to our Orthodox Faith.

At the luncheon the church hall was filled to capacity with the faithful from our own parish and our sister parishes. In addition to the celebrating priests and father Djordje Petrovic parish priest at the Gold Coast parish, there were Zivan Zlatkovic, vice president of the Ross St parish, as well as a respected guest from Melbourne Ranko Cosic, a lecturer at the University of Melbourne. To mention some of the participants in the building of the Holy Church: Stevan Bogdanovic (who in his speech evoked the memory of how as a youth he participated in the celebration of the foundation of the church), Jovan and Milka Vlaisavljević, Nikola Vlaisavljević, Milan and Anka Ćuić, Stanojka Grubesic, Mila Nastic, Milica Bozic, Petar Stojanovic, Staka Vojvodić...

The luncheon was enriched by the performance of our folklore group "Kosovski Bozuri". In his speech, the President of our parish Stevan Vlaisavljević, among other things, briefly reminded those present of the rich history of our parish and all those who have invested their efforts in the construction and beautification of the Holy church from the 70's until today.

On this occasion, special medallions and certificates of appreciation were awarded to those who contributed $500.00 or more towards the iconography project of our church. With God's help, Archimandrite Alexei from the Holy Transfiguration Russian Orthodox monastery near Bombala, with his team, will begin the iconograpy project in early October - to the glory of God and the honor of St. Nicholas the Miraclewoker of Myra and to the spiritual growth of all parishioners.