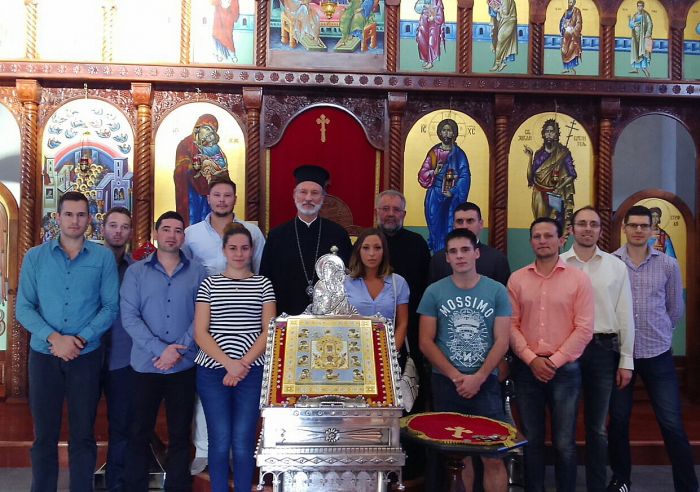 On Saturday the 29th of November, on the feast day of the Holy Apostle and Evangelist Matthew, on the Gold Coast, Queensland, the Serbian Orthodox Youth Association held its Annual General Meeting (AGM).

In the parish hall of the Dormition of the Most Holy Theotokos and in the presence of His Grace, Bishop of Australia & New Zealand, Irinej and Father Djordje Petrovic, the Serbian youth gathered from across the East Coast including Brisbane, Sydney, Melbourne and the Gold Coast itself.

Initiating proceedings the gathering was blessed by His Grace and the attendees were introduced to the work from each state representative from the aforementioned cities, including a special report from the Serbian Festival Sydney director. Following which the National Executive Committee was released from its duties and a presidium elected to conduct the remaining points on the agenda.

Following which, the organisations financial status, humanitarian work and modifications to the constitution to improve organisational efficiency were brought to light.

One of the most important outcomes was that parish representatives were established at each Church-School council, to ensure the organisations solid foundations at a grass-roots level and consequently a source for constant reinvigoration. It was agreed that this would give the young people involved a taste of responsibility, sense of achievement and aid them in their future endeavors, whether in further schooling or professionally, as the lessons learnt can be used as a stepping stone in all facets of life.

Following a short break and commencement of the working group, attendees voted in a new National Executive Board.

Attendees would like to thank the committee members involved from Queensland & NSW who cooperated to ensure a successfully AGM, His Grace for taking the time to attend and impart his wisdom and words of encouragement, Fr. Djordje and the Circle of Serbian Sisters for their hospitality and exceptional lunch.