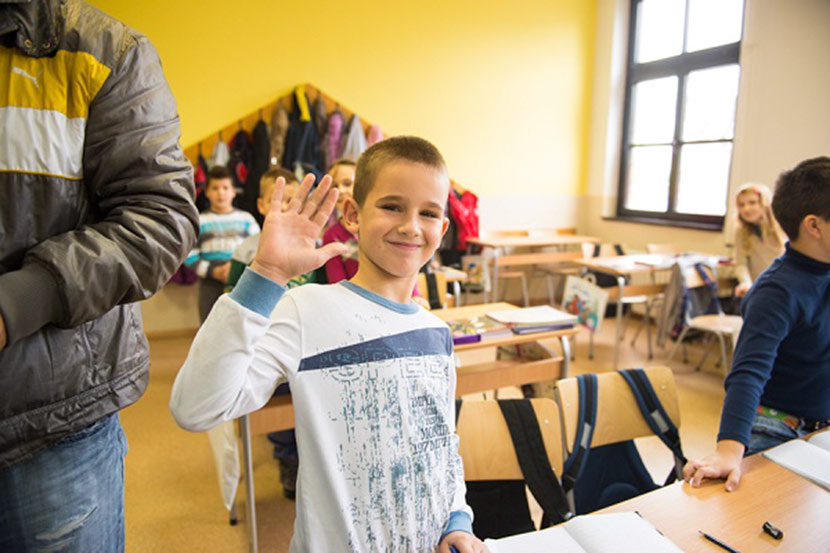 In the year behind us, we faced a flood and many of our compatriots have lost everything they had been acquiring all their lives. In addition, many other people needed support to improve their situation.

Bearing all this in mind, the Ana and Vlade Divac Foundation, with the support of numerous partners, companies, individual donors, organizations and volunteers was striving to help wherever it was needed by implementing a number of projects that have brought delight and joy to people they were intended for.

As a result of the action "BIG HEART" playgrounds in 5 kindergartens from various parts of Serbia, were built or reconstructed in 2014, to the delight of children who play in them.

RECONSTRUCTION OF ELEMENTARY SCHOOLS IN SERBIA

During 2014, Ana and Vlade Divac Foundation renovated 6 primary schools in Serbia education as part of the project "ONE IN A MILLION", thus more than 2,000 pupils received better conditions in which they can attend classes and continue their.

SUPPORT AND INCENTIVES FOR RAISING THE BIRTHRATE IN VLADIČIN HAN MUNICIPALITY

As part of the project Babies are IN, implemented by the Foundation and Vladičin Han municipality with one of the lowest birthrate in Serbia, 24 families that welcomed a second and/ or third child, between September and December 2014, were awarded a monthly allowance in the amount of 5,700.00 dinars for a period of 24 months.

Through our support program to single parents, we helped 9 families by awarding them a monthly aid for a one-year period.

As part of the project "Strengthening of human rights and economic empowerment of single mothers in Serbia", which the Foundation implemented with the financial support of the EU Delegation to Serbia, 10 best business ideas of single mothers were selected, and mothers were awarded funds for self-employment in the amount of 1,000 EUR.

SUPPORT TO YOUTH INITIATIVES AND PROJECTS

As part of its support to young people in Serbia and their empowerment, the Ana and Vlade Divac Foundation supported 94 youth initiatives in 9 municipalities in Serbia through Divac Youth Funds project and strengthened 6 youth organization through Celebrating Diversity project. Thanks to this support, young people from less developed municipalities were given the opportunity to engage more actively in their local community and decide on issues related to their position.

In less than six months, Ana and Vlade Divac Foundation implemented reconstruction and aid projects in flood-hit areas in the amount of USD 1.8 million. With the support of many partners, companies, organizations and cheritable individuals from the country and the Diaspora we renovated three kindergartens, four schools, three outdoor sports courts, two centers for children with disabilities, 100 family houses and we awarded 120 financial grants to families to restart their business or agricultural production.

A lot of new projects and activities await us in 2015 because there is a large number of those who need our help. We believe that together, and with the support of our old and new partners, companies, organizations and charitable individuals, we will be able to do many noble things!